Perseverance Pays Off with a Rain Garden 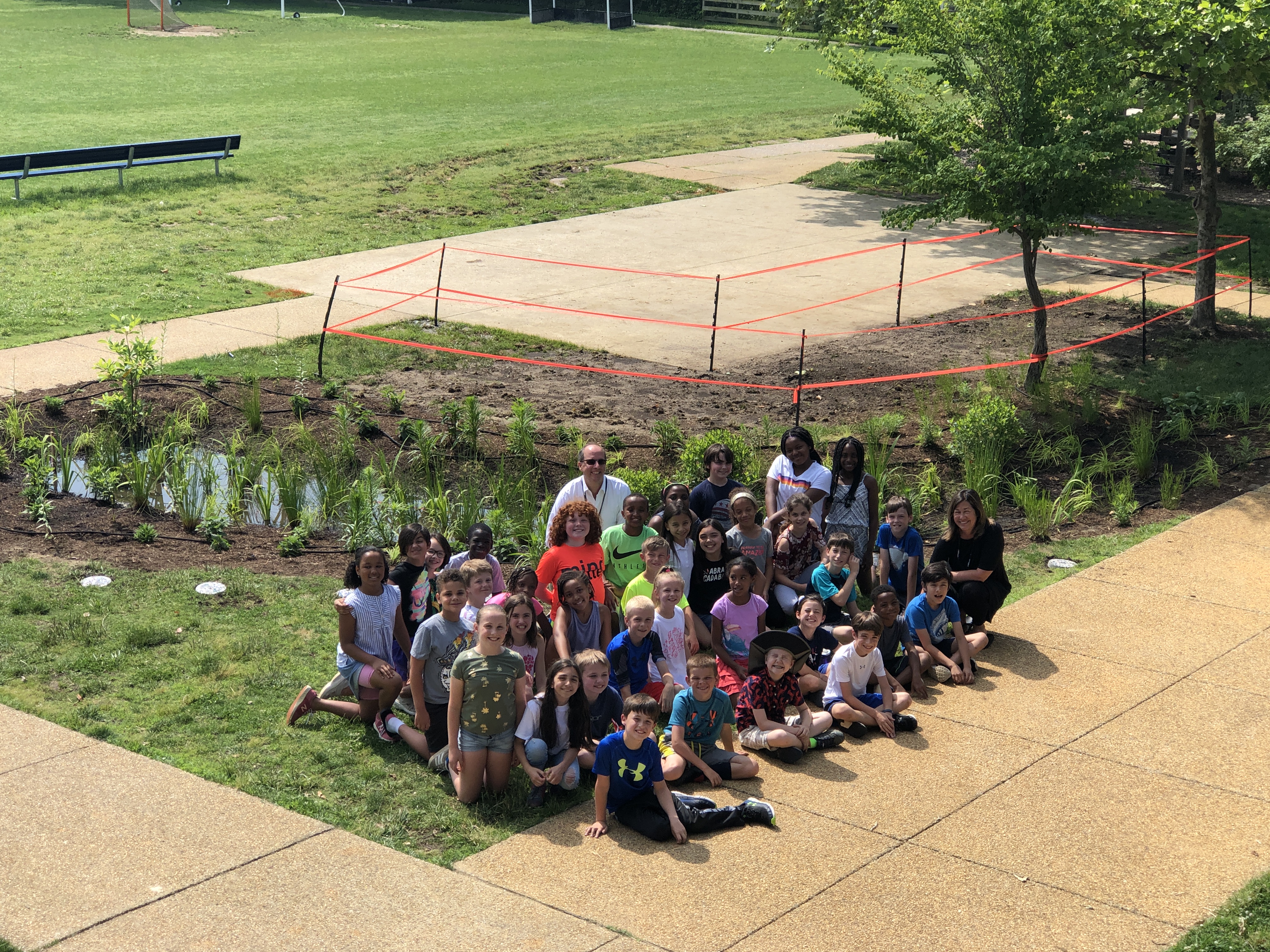 The project was huge, but, last spring, perseverance on the part of the Class of 2027, parent volunteers, teachers, and the facilities crew paid off in producing a large, much-needed, and beautiful new rain garden in the middle of campus. Located in front of the Manse Addition, the rain garden is home to more than 200 plants, shrubs, and trees and is already doing a great job of slowing runoff from collecting and pooling on the basketball court and the grassy areas surrounding it. The garden is comprised of a 20-foot long graded, three-foot deep trough layered with gravel, and bio soil, a combination of sand and loam. As stormwater runoff collects on the surface, it seeps into the depression and surrounding areas. The runoff is filtered by the layers, which allows the water to disperse slowly underground or be absorbed by the water-loving native plants instead of remaining on the top and creating puddling and erosion. 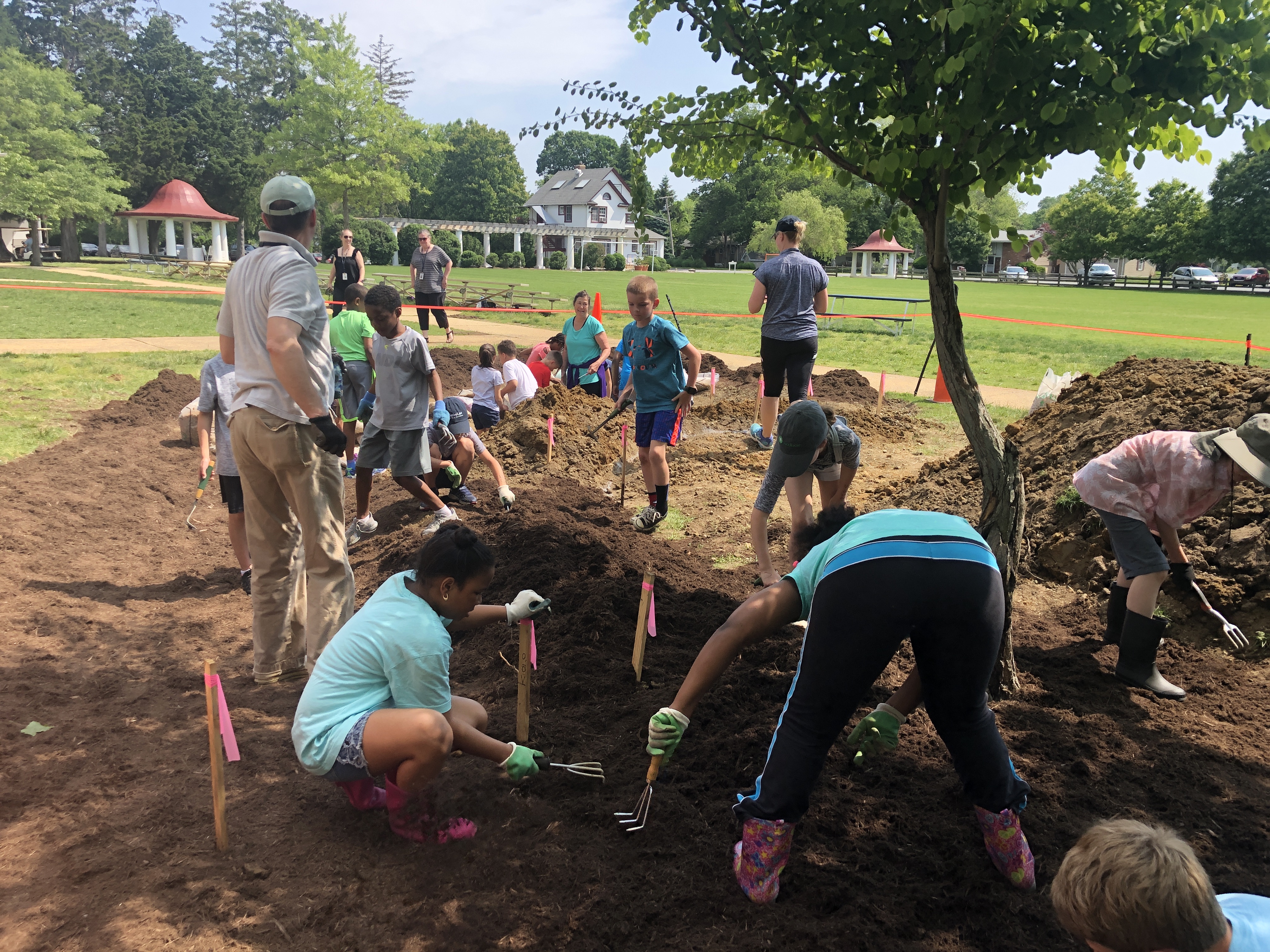 The journey started with a successful grant application by Facilities Director Noel Gasparin, Thinkering Studio Coordinator Carol Mahoney, and Lower School Science Coordinator Dr. Meredith Marcum to the Chesapeake Bay Trust in January. The Meaningful Watershed Educational Experience grant was accepted and provided $5,000 to build the garden. In anticipation of the build, Meredith Marcum and Carol Mahoney devised an interdisciplinary unit for the fourth graders that involved the study of stormwater runoff on Key’s campus, the greater Hillsmere community, and its impact on the health of the Chesapeake Bay. The 4th graders traveled to Towson University’s SciTech lab in Baltimore’s Inner Harbor to participate in a hands-on field trip during which they investigated how to build the most effective scale-model rain gardens by layering different substrates including loam, gravel, sand, and mulch and visited a large rain garden on the premises.

Back on campus, the fourth graders began asking complex questions such as why does Key have standing water on parts of campus after a hard rain? What impact does impervious and pervious ground have on water management?  What can the school do to stop stormwater from getting into the bay? Students quickly realized a rain garden was the best viable answer to the last question, and the fourth graders toured the campus to determine the best location to build one. After choosing the site, with guidance from Noel Gasparin, the students and teachers turned to Chris Moore, a local Hillsmere resident and landscape architect to help plan the design of the garden.

The rain garden dig started on a warm humid weekend with the facilities crew doing an initial excavation. Because of an unexpectedly large amount of concrete and clay in the soil, what was thought to be a half-day job took all weekend. Monday dawned hot and bright and parent volunteers arrived to create the sloped grading necessary to funnel the water, which required digging by hand. Finally the students arrived ready to do their part to complete the project. They spent hours emptying and raking bags of gravel and then pea gravel, knocking dirt off the pieces of sod (which were reused on campus) and mulching the area. On Thursday and Friday, they again worked with teachers to mix sand and loam together to create the biosoil for planting several bushes, a tree, and hundreds of native plants and flowers. Many of the children volunteered to work on the garden during subsequent recesses as well. As part of their Medieval Islamic unit, the fourth graders made Islamic-art inspired rotational-symmetry stepping stones in maker tech. The tiles for the mosaics were donated by a long-time Key School family. On June 7, the final day of school, the entire Lower School community gathered around the rain garden for a dedication ceremony.

The students proved, through the creation of the rain garden, which required grit and hard work, to be thoughtful environmental stewards of both the campus and the bay and that even young children can make a real difference in helping improve the health of the Chesapeake Bay.